Gigging and The Gig Economy

Ok, not that type of gig. The Gig Economy is something a little different.

So in an age of hot-desking, freelancing and contracting, in an age of the glamorously titled “gig economy” I thought it would be great to explore the fundamentals of what is meant by “gigging”. Then ultimately look at whether being self-employed could be beneficial to an older worker too?

What is the gig economy?

According to one definition, the Gig Economy is

“a labor market characterised by the prevalence of short-term contracts or freelance work, as opposed to permanent jobs”.

Trades that could be suitable for “gigging” include taxi driving, delivery drivers, accountancy, IT, hair dressing, web development, gardening etc.

And – taking polar opposite viewpoints – it’s either a working environment that offers 1. flexibility with regard to employment hours, or… 2. It’s a form of exploitation with very little workplace protection.

Let’s look at these opposing views.

In the gig economy, instead of a regular wage, workers get paid for the “gigs” they do, such as a food delivery or a car journey. In fact in the UK it’s estimated that five million people are employed in this type of capacity.

Proponents of the gig economy claim it works because people can benefit from flexible hours and have control over how much time they work. Thus they can juggle other priorities in their lives, such as; for older workers, caring for family members, or retraining as they seek to change career. 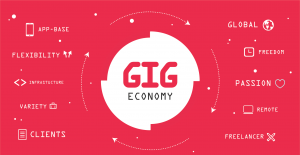 In other news. Workers in the gig economy are classed as being independent contractors which means they have no protection against unfair dismissal, no right to redundancy payments, and no right to receive the national minimum wage, paid holiday or sickness pay. So are they being exploited?

The ruling by a London employment tribunal meant drivers for the ride-hailing app would be entitled to holiday pay, paid rest breaks and the national minimum wage.

Having said that, being part of the gig economy doesn’t necessarily mean you have to work for someone else, as an independent contractor, or otherwise. You can work for yourself, and get creative too..

The Gig Economy and Generation Cherry

From Tim Drake’s excellent new book “Generation Cherry” he states that it’s “easier than ever to become a micro-entrepreneur at low risk” by utilizing your skills and hobbies to make money.

·     Become an artisan retailer by selling the objects you make such as clothing etc. on sites such as Etsy www.etsy.com

·     Sell your expertise or services on sites such as TaskRabbit https://www.taskrabbit.co.uk/

It’s a chance to be creative and earn a few extra bob utilising the talents you have or the items you no longer want.

And, according to a survey by Markel International 90% of self-employed workers are happier being self-employed than being in traditional employment, with freedom and flexibility being the key factor as to what they enjoy most (63% cited freedom/flexibility as the main enjoyment factor).

So don’t discount being self-employed as a career option. Start gigging today!